It won’t be long now until the 2017 Christmas issue of Early American Life, with my article on how to make cotton batting candy containers and the Holiday Craftsman Directory, is out! I just received my advance copies and it is a fun issue!!! There are several other projects, besides mine, plus recipes and Christmas themed articles to put you in a holiday mood.

I don’t do as many how-to articles as I once did… so it was a bit nostalgic to visit my past and design a new project for my article. I made two versions of two different candy containers, which means there are lots of options for people to try.

A huge thank you to Early American Life for asking me to contribute to their Christmas issue and for including me in the Holiday Directory of Traditional American Craftsmen once again! ❤ 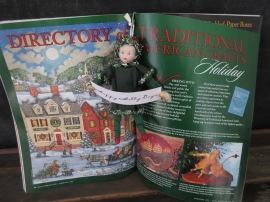 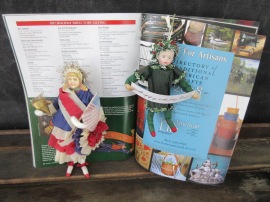 My name is Paula Walton. I’m a working craftsperson. I’ve been self-employed since 1986, when I started selling the items that I make under the name A Sweet Remembrance. Among other things, I am a doll maker, a dressmaker that specializes in reproduction women’s and children’s clothing, maker of spun cotton ornaments and holiday figures, and a freelance designer. Upon occasion I write magazine articles and am a Craftsperson in Residence. I teach and do demonstrations quite frequently, plus I was previously the director and curator of a small museum in Connecticut. View all posts by paulawalton

I was published in:

My home featured in: